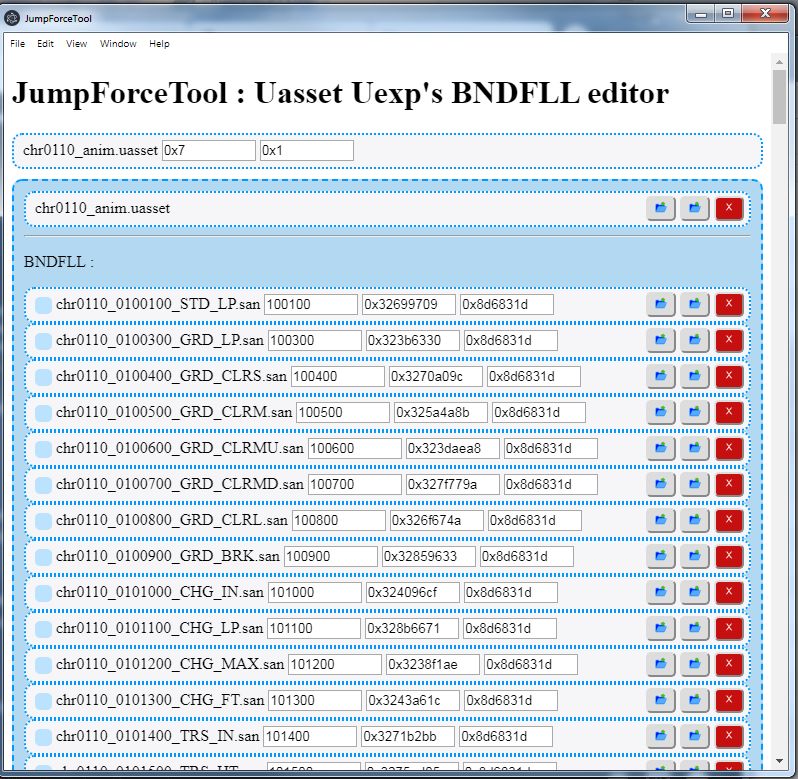 JumpForceTool , is a tool from a idear and discovers of Ultimate Festive Despair Lean :

This version try to permit to extract and repack files inside .uexp file (+ adaptation on .uasset file).

This version is few tested but sean to rebuild perfectly some original files.

There is the possibility to edit the fileId and unknow values (the second sean to be linked to the file extension, so may be it's will be hided on another release). It's possible to drag and drop visual files's blocks to re-order inside the file.

Notice : it's may be could be used for Zfighters and some others game under Unreal (but it's not tested a lot).

Hope that could help.

Inside, there is also :
-"UassetUexpPack.exe" : a console version for extract / repack , by drag a drop or use command line. witch is better for massive extract, or fast edition
-"XenoWxHexEditorColorMaker.exe" a tool to color/tag  binary files. for debug

-"XenoXmlConverter.exe" another tool to convert into Xml the uexp (without extract file) , to help to find or debug values/ cases.

Notice : same if it's a exe, the tool is done with Web technologie. So if someone want to make a better UI, or add some stuffs, don't hesitate, here the sources :

I don't know if something is needed more.

may be the framework .net (dotnet) 4.5 minimum , witch is asked when I build the release.

and may be Chrome installed, but not sure (can't test it, I have Chrome every where).

-after search for any case of having BNDFLL flag in uexp file, witch give the fact there is files inside, there is more allowed extension to go inside a uexp file.
-to help to find some stuff, there is a tool to color/tag the binary file (with wxHexEditor), and another to get a Xml version of binary file (except file's datas).