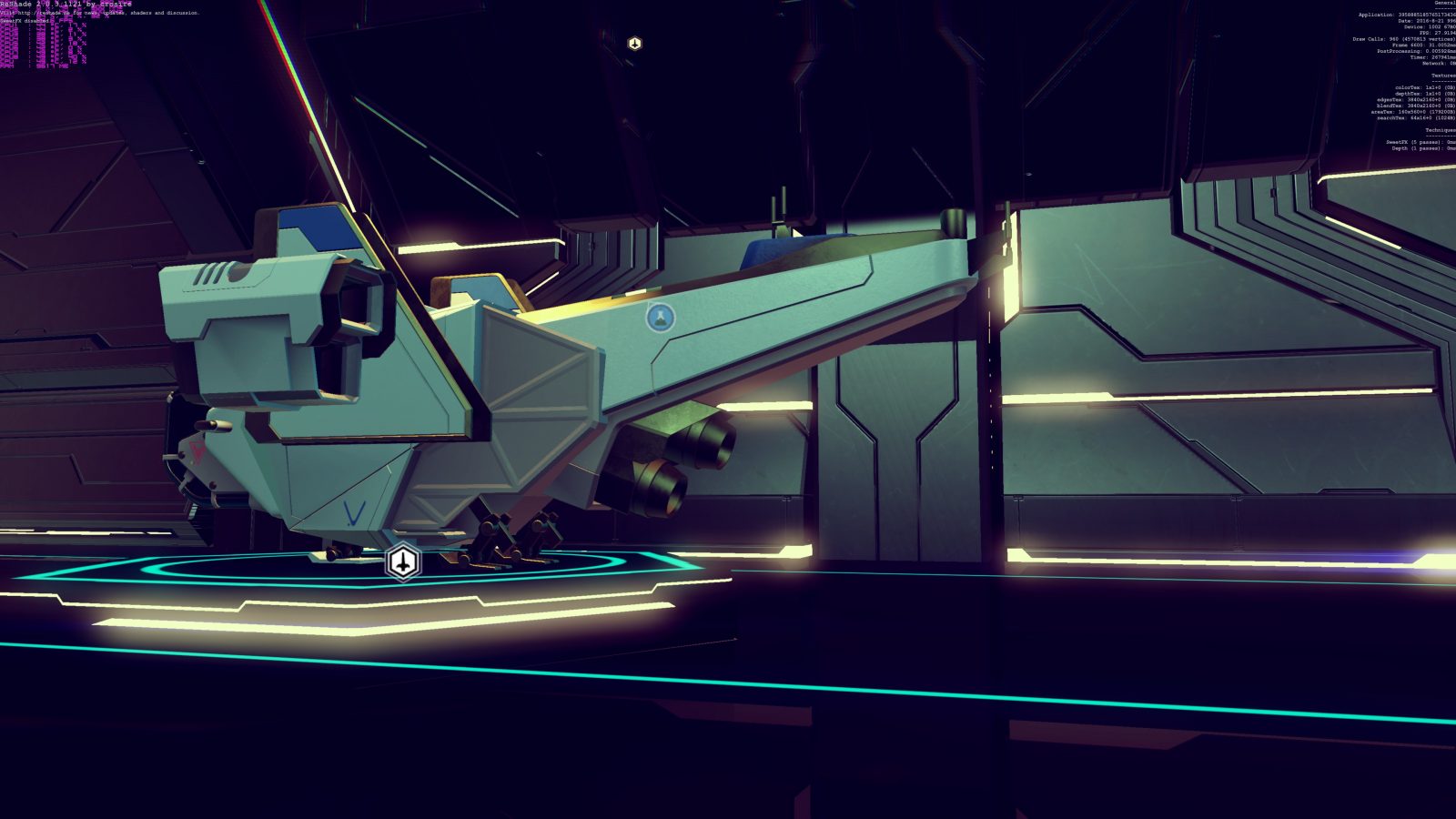 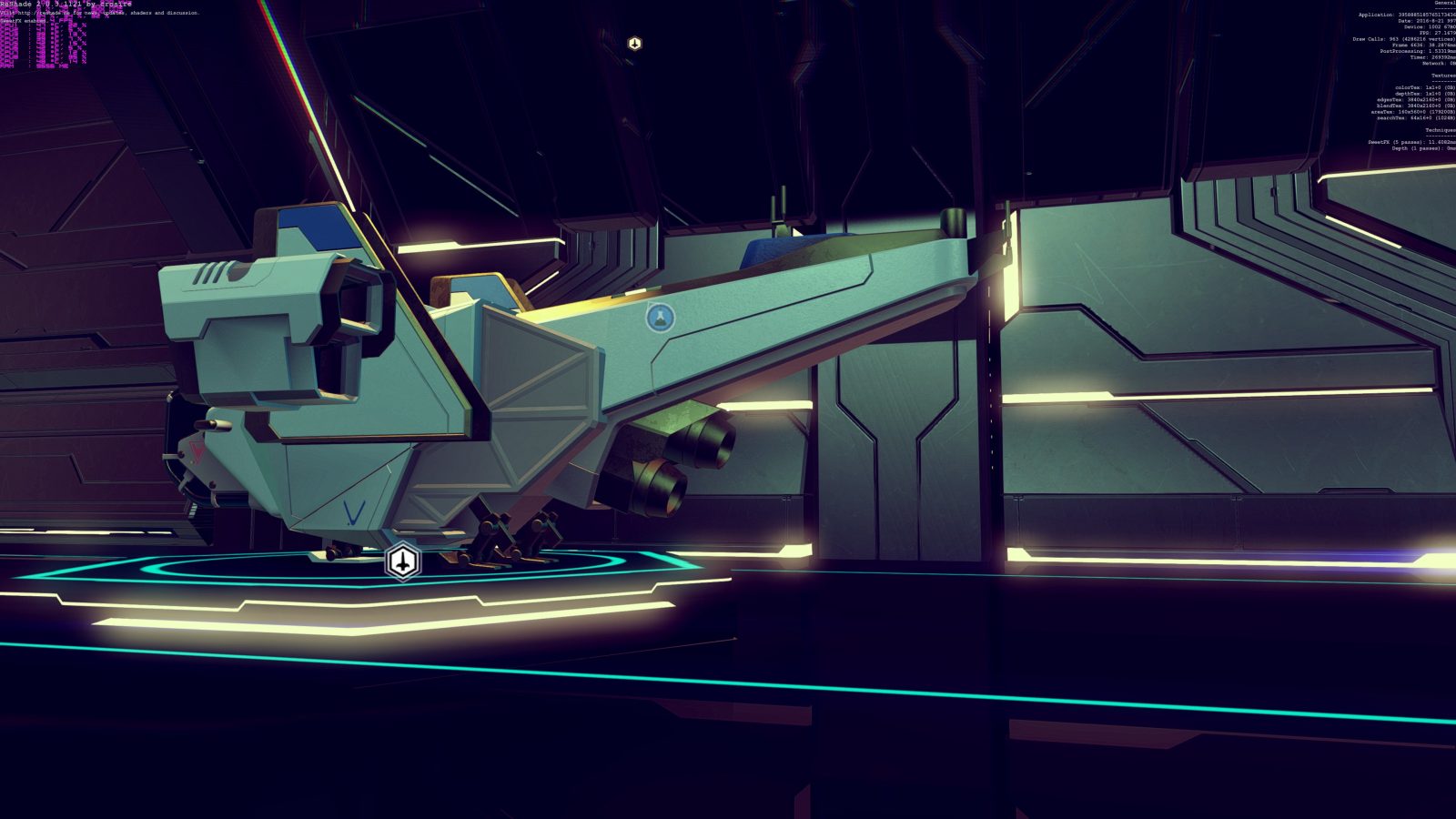 Warning: Thus-far mainly tested in combination with R9-290X and HD6950!

A set of post-fx based on the SweetFX (ReShade 2.0.3)  shaders/package, with some minor modifications to solve (in my case) display in linear instead of sRGB space.
( Having a support topic mainly dedicated to try and solve depth-buffer issues; http://reshade.me/forum/troubleshooting/2237-no-man-s-sky-smaa-can-t-access-depth-buffer )

This set of post-fx first executes SMAA with not too heavy settings in order to eliminate the most obvious jaggies, followed by a quite soft LumaSharpen in order to raise contrast that might have been lost due to SMAA. This all is passed through the Dither and FXAA-effects in an attempt to remove any banding and the last bits of jaggies.
It has been specifically my aim to not-effect lighting as much as possible, only to remove jaggies and highten fidelity slightly!

Effects can be toggled as by-default with SweetFX/ReShade using the scroll-lock key.

Without filters: (Open in new tab for full 4k-res picture)

With filters: (Open in new tab for full 4k-res picture) 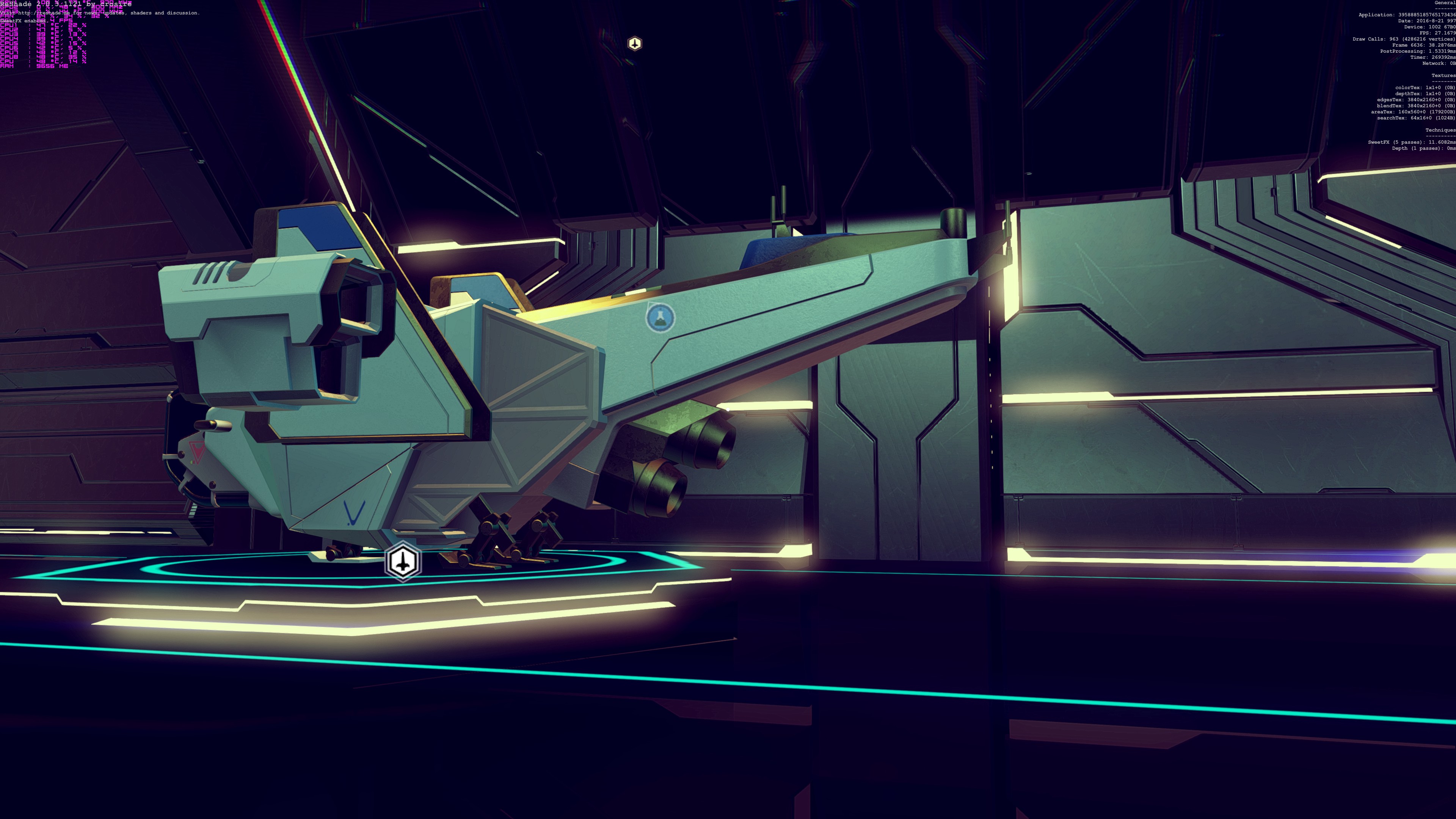 E-mails regarding this mod may also be sent to [email protected], please use a reference to "No Man's Sky SweetFX Mod" or something along those lines for the subject :)

Note; The uploaded file does not have the debugging data enabled, this is only for performance showcasing purposes :)

Simply unpack the contents of the rar-file to your "No man's sky/Binaries" folder and run :)

The reason this mod started out was due to problems with SMAA implementations in other mods thus far making things appear too dark on the AMD end.
I am working on a configureless solution, but don't have one (yet).
Right now, to alleviate the pain of having to manually alter a shader, I've added a setting to the /SweetFX/SweetFX_Settings.txt file
Please open it and change the line where it reads "#define USE_AMD_WORKAROUND  1 //[0 or 1]" so that the value is 0.

Re-uploaded; I had been a fool and forgot to include the SweetFX.fx file!

V0.2A: Easy NVIDIA setup.
As I had originally feared; the line that fixed SMAA for my side had over-brightened things for NVIDIA users.
Now I've added a simple toggle to the SweetFX_Settings.txt which enables or disables that line (yay ? )

V0.2B: Working easy NVIDIA setup.
Had implemented the if-statement on the wrong line...

V0.2C: Working easy NVIDIA setup. - actual implementation
Been such an ass that I'd repacked the wrong folder... While trying out changes I have "dirty" directories and sometimes copy the changes from the wrong folder. (I.e. I have 3 different combinations of settings which i move in/out of the binaries folders to compare them more quickly).
Won't update things in the middle of the night without unpacking and testing that version again...

V0.3A: Took me a bit to finish that up; but I've changed the settings a bit to make the effect more suitable for 1080p.
There's still a bit of touching to the text, but at least it's much less apparent now. There's just a minor bit of pixels that won't get anti-aliased in order to cut the smallest stars a little more slack, too. As far as i've seen on this monitor quite a bit less stars are dimmed, and those which are also to a bit of a lesser extent.   Feel free to leave your thoughts again in the comments!
NOTE: if you had downloaded the rar past hour and hadnt a version of the mod before or removed the opengl32.dll file before updating, you mightve missed the file in my upload. please redownload the archive if you need to or use one from an older version if you have it (nothing actually changed there yet). I just heard this and changed the file, sorry!