Everything Unlocked & Available Though the Black Market 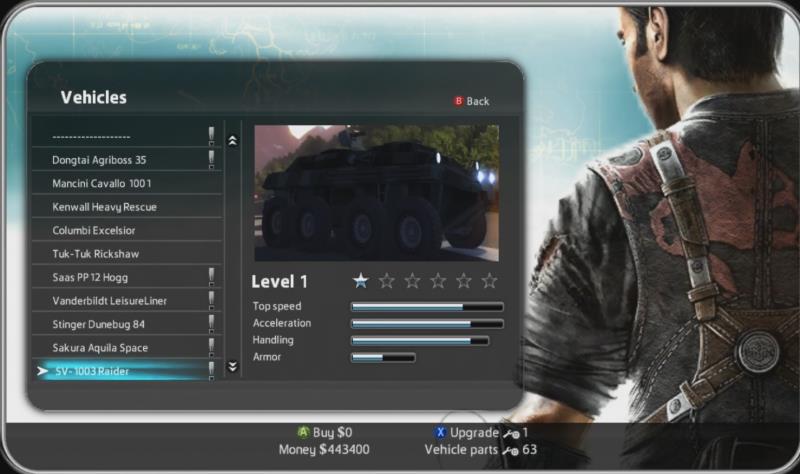 I have updated again, I forgot to change the Chaos levels needed to unlock the Agency stuff.  I have corrected that.  So now as soon as you unlock the black market you unlock everything.

I have updated for those who had problems upgrading the agency vehicles.

I have refined and shrunk the size of the black market mod, it has all the pictures and everything from azam8, and maxovitsj on the Eidos forums just in a smaller package for quicker loading times in the black market. This has all vehicles and guns unlocked including Baby Panay's Rocket launcher, and the Bubble Blaster

Don't upgrade the added cars, only the agency stuff the others will just be wasting your money.

Here is a vid of it in action: http://www.youtube.com/watch?v=RHottJiVMb8

A few people have been asking me how to install the mod, I have streamlined it into 2 archive files so you copy them into the archives_win32 folder in the just cause 2 directory.

And to Hellonwheels I forgot to rename the files after the last update, but they have been fixed now. The vid was for the older files before the new update.

To Wildride300 and others with vehicles spawning far distances from you... I cannot come up with a fix because i have not been able to replicate this to find out where the error lies.  If you are using the recent bolopatch beta to spawn the vehicles then that is where the problem is because it puts it where ever the cursor it even if it is 100 yards away.  the only thing i can think of is if you are using another black market mod, or a mod that uses the blackmarket bin and it is conflicting with my files

For those that are having troubles installing, you have to extract the 2 files x_buzz and x_buzz.tab to the archives_win32 which should be at a path like: C:Program Files (x86)SteamsteamappscommonJust Cause 2archives_win32 if you are not seeing any new vehicles in the black market you are not doing it right

For those complaining about these not being all the cars, you have to realize a couple things, one is that  some cars share the same values and are just spawn random versions of the same vehicle, like the Agriboss has like 3 different versions all spawned by the same item number so i cant make separate versions for each.  The other thing is some vehicles are either situationally spawned or only exists in certain locations like the MV Command, and the Fending EC2 Lift.  If you need help finding a vehicle check this list out http://petera94.co.cc/justcause2/vehiclelist.php it has coordinates for most vehicles.

So basically if  the vehicle is not in this mod it is because it shares the same values as another vehicle, or they are only in certain areas at certain times.

For those wanting a hot air balloon, we havent figured out how to spawn it and work, it seems to be a triggered event type of mechanism that only works where it is normally spawned in the game.

Ignore bigbangAt's crazy comment, i have been using tinyupload for a while without any problems.