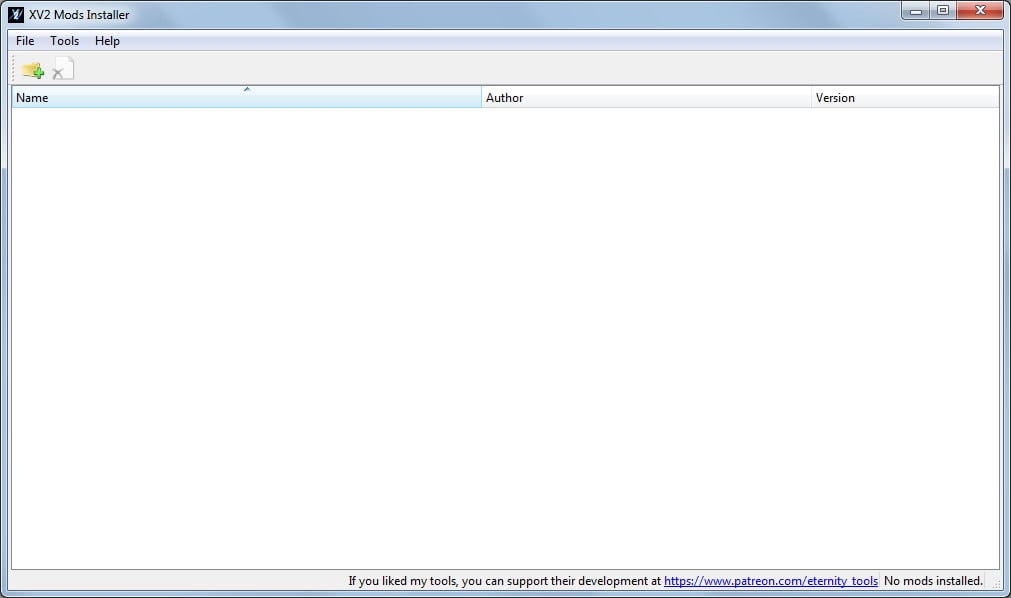 NOTICE: Installer 3.81 fixes an important bug in 3.8 regarding handling of IDB files that could have caused some corruption on skills/costume mods installed by 3.8. The installer 3.81 will apply a fix to solve said corruption. To modders that saved costume/skill mods in 3.8 of editors: review the value of IdbEffect to check if they are correct. The following tools also need to be updated: Cycit, Cac2X2m&X2m2Cac, genser and XV2 Quest Importer.

NOTE: 3.8 requires clean installation. The installer will auto-detect and old installation and offer to do the cleaning. The IDB format has changed in  game 1.18, any mod that may have included an idb file on its own (if any) cannot work unless updated.

If you like my tools, you can support their development at: https://www.patreon.com/eternity_tools

This is a series of tools to mod Xenoverse 2. The patcher, the installer and all the other tools will be moved from animegamemods to here from now on.

xv2patcher: a tool that includes a series of patches for Xenoverse 2, such as allowing files to be loaded from data, allowing more character, skills, stages, etc

genser: "generic serializer", a program that can convert several Xenoverse 2 binary files into .xml and back.

Cycit: ("Customize Your CITizens"), a tool to customize the npc citizens of Conton City. It is also able to convert them into x2m clones.

Cac2X2m: a tool able to get a custom character from a save file and turn it into a clone that can be installed with XV2 Mods Installer. It also includes X2m2Cac, a tool that does the reverse operation.

Xv2 Quest Importer: A tool that can import/export quests in the x2qs format. You will be using this while developing x2m quests aswell. It includes all vanilla decompiled quests, and also a syntax highlight file for Notepad++ (for x2qs files).

xv2savdec: a tool that decrypts/encrypts DBXV2 save files. It also includes xv2savown, a tool that allows to change "SteamID ownership" of the save. Always backup your save file before using these tools.

yace: ("Yet Another Cpk Extractor"). Just a cpk extractor with a gui. You can also just drag and drop one or more .cpk files directly into it.

dual_tool: A tool to give bac/bcm support for dual skills.

Pack of internal stages: a pack that contains stages that are usually non-selectable/non.playable, and which can be played upon installation. I think this one is to big for the site, so download here: https://mega.nz/file/qtkwiAxb#Vqmm64OMoQe8K0ytwe3oNxGUN9Y9VhNJAH9u7Z-Q19k

Sample quests: a collection of quests that were meant as samples for developers when x2m quests were added, but they can be installed by anyone.

Source code can be found in https://github.com/eterniti  (WIP, there are still some projects missing)

- Fixed compatibility with game version 1.18, which is now the only supported version.

- Added a patch to disable "controller disabled" message, so that the CPU vs CPU hack can work again.

Note: this patch is NOT enabled by default, to enable set "stop_controller_not_connected = true " in the Patches section of the .ini.

- Possible fix for the patcher not running under Wine and derivatives (untested, and will still require dll override)

- (Common) Fixed incorrect handling of 1.18 IDB file. - (Installer) Because of above, there may be some minor corruption in in some values of the IDB of skill/costume mods installed by version 3.8 Installer 3.81 will apply a fix to all installed skill/costume mods to solve said corruption. This is done automatically without user prompt, and only once.

- (Common) Notice: the character slot file (XV2P_SLOTS.x2s) format has slightly changed due to the "32 bits dlc overflow". (new field added at the end for the higher 32 bits of the dlc key)

- The "Syntax Highlight for Notepad++" updated with new DLC constant.